SPOTLIGHT ON: The Uncommon Collection – Check It Out!

My newest collection of fine art jewelry is called the “The Uncommon Collection” because the stones I’ve selected are uncommonly impressive, uncommonly splendid, often uncommonly rare and consistently set in uncommon designs! 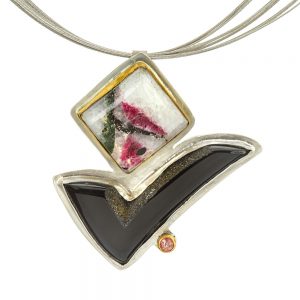 “Check It Out” features a single square tugtupite stone surrounded by a 22k gold bezel and set on point above a black raw & polished onyx druzy – readily recognized as a check mark and certainly an uncommon design. As accent, the pink topaz surrounded by a 22k gold bezel almost serves as an exclamation point! The awesome & appreciation factor of this pendant rates as off the geological charts! All stones are set on a sterling silver backing – the bale is invisible. 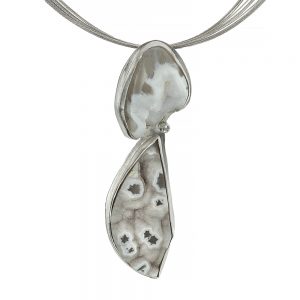 “Ice Flow” is a pure doozy of a druzy – a magical micro-crystalized Ice Mountain geode set in a sterling silver pendant with invisible bale. This hypnotizingly uncommon stone is created by Nature – distinctive and dazzling like the sparkle of sugar or snow catching rays of light – a white druzy is especially ethereal. A Druzy is formed when water brings minerals to a rock’s surface and then the water evaporates leaving the minerals behind to form crystals on top of the rock. Each has particular characteristics, such as crystal size, luster, and color, and they are also thought to increase and balance one’s energy. 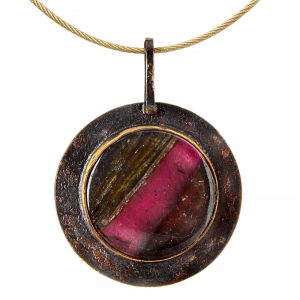 “Raspberry Glow” A spherical design showcases this uncommonly extraordinary stone known as a fluor-liddicoaltite – exquisite and highly regarded by collectors as a rare form of Tourmaline. Crystals within the stone often contain two or more distinct colors and as often appear as banding – here radiating in a hot pink. The stone is surrounded by a 22k gold bezel and set in oxidized silver.

Liddicoatite is found in Madagascar – primarily in the following locals: Antsirabé, Anjanabonoina, Antsongombato, Manapa, Vohitrakanga, and Sahatany. Names every bit as uncommon as the crystals themselves! Also, it is so significant and rare that specimens are found in mineral collections at the National Museum of Natural History, Smithsonian Institution, Washington, D.C., the Natural History Museum, London, the Royal Ontario Museum, Canada and the Geological Survey of Canada.

I’m happy to present several pieces from my new “The Uncommon Collection” and would be pleased if you would forward this Spotlight to family & friends.

Thanks in advance for sharing,